The 800-pound Jefferson Davis National Highway marker was installed in Kern County in 1942. (Robert Price) And then there were none. You might have missed it, but the last known Confederate monument in Southern California has been removed from public view. Without fanfare or fuss. The memorial had been placed […]

And then there were none.

You might have missed it, but the last known Confederate monument in Southern California has been removed from public view. Without fanfare or fuss.

The memorial had been placed along Highway 99 near Bakersfield almost 80 years ago by the United Daughters of the Confederacy, whose specialty was sponsoring monuments to white supremacy across the nation. The unassuming commemorative plaque was part of a bizarre plan to celebrate Jefferson Davis, the president of the Confederate States, as “Father of National Highways.”

Three weeks ago, the 800-pound marker was hauled off to a weedy outdoor storage area and fenced off from public view behind the Kern County Museum.

Davis was a stalwart supporter of Black chattel slavery. The former U.S. Army colonel and Mississippi senator initially opposed the South’s secession. But in 1861 he accepted the call to assume the presidency of the Confederate States because he saw no other way to maintain the slave system. Davis owed his own wealth to the forced labor of more than 100 Black enslaved people who worked on his cotton plantation, just south of Vicksburg.

In Bakersfield, the circular concrete marker with a simple bronze plaque was dedicated on Oct. 14, 1942. (Just 10 days earlier, the notorious Nazi Hermann Göring, director of Germany’s Jewish slave camps, declared that World War II should be called the War of the Races.) The Southern California highway project was led by the UDC’s local Mildred Lee Chapter 1580, named for the sister of Gen. Robert E. Lee.

The marker’s original location is unknown. But in 1968, when the state expanded Highway 99 to create a modern automotive spine for the Central Valley, it was dug up and moved to the sprawling grounds of the Kern County Museum. For the next half-century it sat in a flower bed in an employee parking lot — a sort of landmine of racist commemoration, undisturbed and without explanatory context, waiting to detonate in the mind of any hapless passerby.

The plaque’s text makes a ludicrous claim — contorting history, as all Lost Cause propaganda does. For example, a prominent UDC essay contest required use of the term “War Between the States,” furthering the false impression that an honorable argument over state’s rights animated secession’s epic bloodshed rather than the shameful brutality of slavery. Any essayist who used “Civil War” was immediately disqualified.

In similar fashion, the plaque chirps that, as secretary of War in 1853, Davis “surveyed for military use three routes across the United States. These routes are today our national highways.”

In reality, Davis launched four surveys for possible transcontinental railway paths — a Northern, a Central and two Southern Pacific surveys — plus a fifth survey up the West Coast. But those railway plans aren’t what motivated the UDC’s cockamamie highway scheme.

Carl G. Fisher, a Midwest tycoon in the newly burgeoning automotive parts business, was actually the man who promoted construction of a national highway. In 1912, he dreamed it would reach from New York City’s Times Square to San Francisco’s Lincoln Park. A year later, just at the moment plans for a national memorial to the 16th president were on the drawing board for the Mall in Washington, D.C., the Abraham Lincoln National Highway opened with a splash.

The UDC was abashed.

Determined that the South should rise again, they soon hatched an idea for a corresponding Jefferson Davis National Highway that would span the Southern states. By cobbling together a network of existing local roads in scores of communities, it would stretch from Arlington, Va., to San Diego.

Over the next three decades, highway markers went up sporadically across the Cotton Belt and into Texas, New Mexico and Arizona. The Pacific terminus was marked in San Diego’s downtown Horton Plaza.

Eventually, the group came up with a plan to more deeply embed their Lost Cause mythology. The fifth Davis railway survey went from San Diego to Seattle, effectively linking Mexico and Canada. The UDC decided to take a right turn at the Pacific Ocean. They added a Jefferson Davis Highway leg to connect South to North through the Golden State’s Central Valley.

Kern County’s Highway 99 got its marker.

The small and otherwise innocuous Bakersfield monument is insidious. Its text of raised-bronze letters spells out Davis’ respectable pre-Civil War government job for the United States — “Secretary of War in 1853” — and makes no mention of the Confederacy. If you didn’t already know the name, you wouldn’t know that a traitor who took up arms against his country for monstrous personal gain was being hailed as a “father” of modern America.

In one corrupt sense he is certainly that, if only ironically, given the apparent intransigence of white patriarchy represented by such monuments. The harmonious reunification of a split nation, North and South, was the benevolent UDC shield designed to hide the Jim Crow poison of enforcing white supremacy.

The UDC placed its highway markers with the cooperation of local jurisdictions. On Feb. 1, 1946, on the heels of American victory in World War II, the group went big. It looked to the California Legislature for formal, statewide designation of Highway 99 under Davis’ name.

Prominent Assemblyman Thomas H. Werdel — a conservative Bakersfield Republican — agreed to enter the resolution. It did not pass.

In an interview, Mike McCoy, executive director of the Kern County Museum, said of the highway marker: “It’s a millstone.” He was describing the monument’s flat, bulky round shape. But he could as easily have been describing its social impact. Jim Crow-era Confederate monuments drag down progress toward authentic reconciliation.

How the marker got to the museum McCoy did not know, but he said it was never formally entered into the collection as a historical artifact.

In June, as the chorus swelled across the country for the removal of Confederate monuments after yet more killings of innocent Black Americans by police in Georgia, Kentucky and Minnesota, McCoy received an email from a student at UC Merced. She was angry about the Davis marker.

The director, who did not divulge the student’s name, understood the gravity of the affront to her. The monument was promptly removed from public view. Longtime Bakersfield Californian columnist Robert Price mentioned the ejection in passing in a rambunctious story about a local Confederate-era conman.

The Davis Highway marker is not grand, but it represents an outsize arrogance embedded deep within American society. Often, the routine conceit is so pervasive as to simply merge into the civic landscape.

Take South High School, a few miles from the museum, which announces itself in blaring painted murals and flashing digital signage as “Home of the Rebels.” School paraphernalia features a gray and blue color-scheme and an emblem of crossed swords. The yearbook is named for Virginia’s famous ironclad Confederate warship, the Merrimac.

South High opened in 1957. Arkansas’s Little Rock Central High was then grabbing headlines for noisily defying integration requirements imposed by the U.S. Supreme Court’s recent landmark decision in Brown v. Board of Education. For a new public school like South High, the implications of a Civil War theme with a Confederate tilt are hard to miss — especially when it spreads out into a surrounding neighborhood of tidy bungalows along residential streets named Sumter, Shenandoah, Raider, Monitor, Merrimac and Rebel Court.

Plantation Elementary School, one short block past the South High athletic fields on a street with the same name, opened in 1962. That was the year Air Force veteran James Meredith became the first Black student to enroll at the segregated University of Mississippi, escorted past jeering white supremacists by federal troops dispatched by the Kennedy administration.

Chicano writer Nicholas Belardes, in a bracing recent essay posted on Boom California, the online journal of UC Press, called for elimination of all those words and symbols, which he faced daily growing up in Bakersfield. It took him years to understand — and shake off — the steady, stealthy pressure for assimilation into white culture being implied.

Historian of 19th century America Kevin Waite once wrote that the largest monument to the Confederacy is not made of bronze and placed on a pedestal; it’s paved in asphalt. Like the schools, the Jefferson Davis Highway thrums with an implicit tribute to white supremacy that is embedded “in the very infrastructure of the nation itself.”

The Southern Poverty Law Center audited that national infrastructure in 2016 after a white supremacist’s brutal murder of nine Black Americans at the historic “Mother Emanuel” African Methodist Episcopal Church in Charleston, S.C., that shocked the nation. A comprehensive inventory of more than 1,800 Confederate public monuments, signs and symbols across the country was compiled.

Since then, 145 related to Davis alone have been removed. Now, make that 146.

The Bakersfield marker was the last of four then still displayed in Southern California to honor advocacy for a white America. San Diego’s Horton Plaza marker quickly came down, and two Robert E. Lee schools soon changed their names.

The museum’s McCoy isn’t sure what will become of Southern California’s last Confederate monument. Transfer of the object to the improperly named Jefferson Davis “presidential library” in Biloxi, Miss., owned by the Sons of the Confederacy, is a poor idea: United for Libraries, a division of the American Library Assn., recently rescinded the organization’s Literary Landmark designation because of its continued promotion of fraudulent Lost Cause claims.

Perhaps the marker could be fully contextualized in a museum display illuminating the highway’s racist history, including its Kern County past. That would be useful. Whatever the case, for now it’s right where it belongs — resting quietly out back in the trash.

Wed Jul 8 , 2020
Despite years of research that shows workers are, in fact, competent and capable grown-ups who can get work done at home, a lot of people still seem very worried about the idea. The prospect of working from home — whether because your company is shuttered for the pandemic or your […] 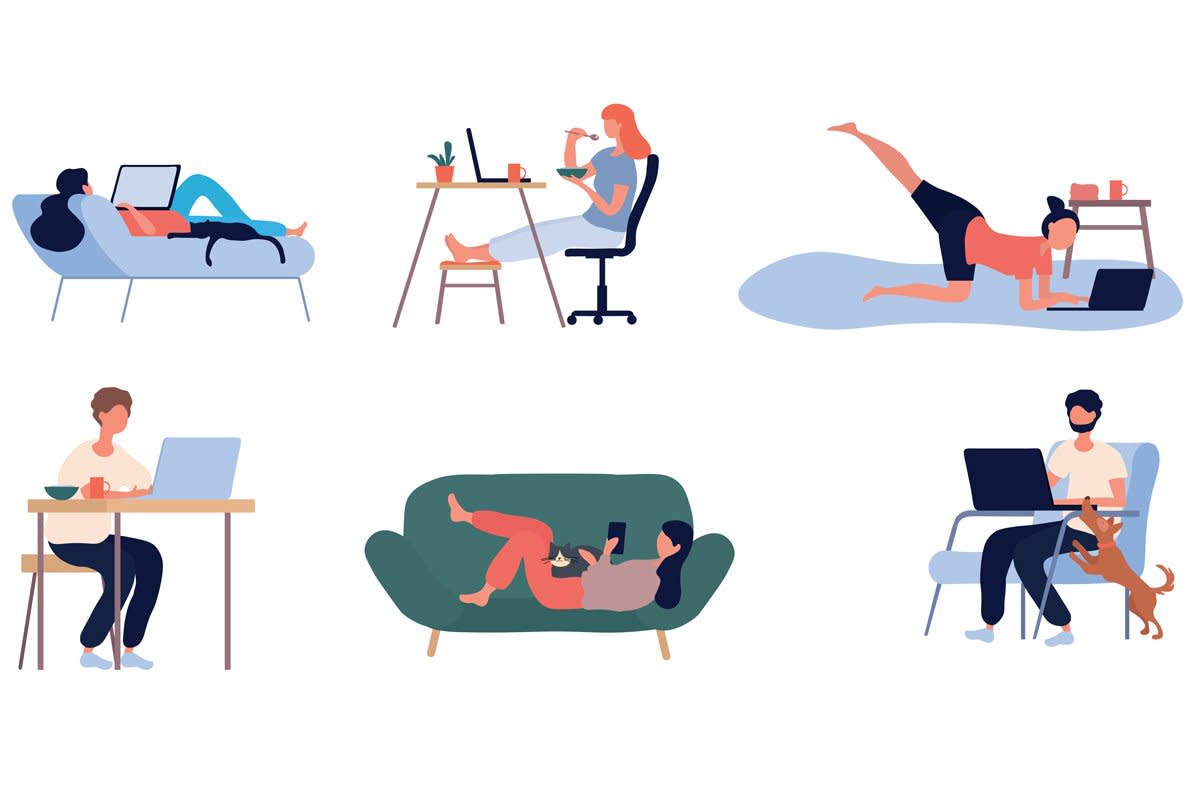