Casey Schreiner, author of the bestselling “Discovering Griffith Park,” on one of his favorite trails. (Dania Maxwell/Los Angeles Times) Cresting an overlook on the Condor Trail in Griffith Park, Casey Schreiner wants us to stop to listen to the chimpanzees. “They’re a little bit chattier now than they were when […]

Cresting an overlook on the Condor Trail in Griffith Park, Casey Schreiner wants us to stop to listen to the chimpanzees. “They’re a little bit chattier now than they were when I was writing the book,” he says, as the hollering echoes up from the Los Angeles Zoo in the canyon below. “It may be because they haven’t had visitors in a while.”

Schreiner has been hiking in Griffith regularly since he moved to L.A. 17 years ago, but in the last two years, he’s become a certified expert — the author of “Discovering Griffith Park: A Local’s Guide.” the first detailed guidebook ever put together for one the country’s largest city parks.

With chunks of history integrated among a selection of 33 recommended hikes, the book, released in the spring, serves as something of an all-purpose Griffith Park companion. And what a valuable companion it’s proved to be: During the COVID-19 pandemic, hiking has remained one of the few leisure activities fully permitted in the city, as long as you bring a mask and keep your distance. (Attractions like the zoo, however, remain closed indefinitely.)

It’s the next best thing to trailing along with Schreiner himself, as he explains why he’s fond of this particular hike, which he calls “the Oak Canyon Loop.” “You see the Verdugo Mountains, you see the San Gabriels back there, you see the freeway infrastructure, you see the river and you see the park,” he says. “It just gives you an idea of how woven into the fabric of the city this park is.”

It’s hard to fathom a Los Angeles without Griffith Park. And yet the gap in the book market illustrates a point: Five times larger than Central Park, home to two of the most iconic landmarks in the country (the Hollywood sign and Griffith Observatory), it’s still largely unexplored by many Angelenos. The park is woven into the city’s fabric, yes, but is it so woven in that it’s taken for granted?

Raised in Connecticut as “100% an indoor kid,” Schreiner wouldn’t have been a top candidate to end up investigating such a question. “I was one of the kids who played video games and board games and would take out old BBC VHS comedies from the library,” he says.

It was only after arriving in Los Angeles to pursue TV writing that he began going on outdoor excursions every weekend. He soon was so thoroughly obsessed that he founded the website Modern Hiker in 2006, just as the online ecosystem was beginning to change the way people sought trail information. The site has grown to become one of the most popular of its kind.

Schreiner, now 39, is a charismatic guide. Tapping into his experience as an occasional on-air TV personality (he was a judge on truTV’s “Talk Show the Game Show” and appeared on a recent episode of KCET-TV’s “Lost LA”), he’ll casually switch back and forth from waxing poetic about the park to tossing a jovial “good morning” at horseback riders passing by.

He’s chosen this hike for us partly for the views — and those chimps — but also because this northern side of the park is much less busy than the southern section, which has recently been slightly overrun with stir-crazy Angelenos looking to get out of their homes. (Rangers have been intermittently capping visitors since trails reopened in May.)

“The core message of Modern Hiker is that this stuff is out here for everybody, but now we’re getting some of these trails that are not designed to handle this many people,” Schreiner says. “I think it demonstrates that there’s a really strong desire and need for more parks in L.A.”

Ranking way down at No. 49 on the Trust for Public Land’s annual ParkScore rating (No. 1: Minneapolis), Los Angeles is not a model city when it comes to public green space. And as sorry as that reality is, it would be much worse without Griffith Park’s 4,300 mostly untouched acres. “It really is a world-class park,” says Schreiner.

Even that would not exist if it hadn’t been for Griffith J. Griffith, the Welsh mining magnate who donated the land to the city as a Christmas gift in 1896, with the stipulation that it be used only as a park, free to all. Nearly seven years later, though, Griffith would attempt to kill his wife, Tina, in a drunken, delusional rage. (She survived but lost an eye. He was sent to San Quentin for two years.) His legacy is usually referred to as “complicated.”

“He did shoot his wife in the face,” Schreiner says, ticking off other sins as he navigates some tricky trail terrain. “He hated Catholics. He had some pretty terrible views about certain types of people. But in terms of park philosophy, he was really, really progressive for his time … L.A. would never of its own accord build a park like this.”

The man enshrined by name (and via exhibit and statue) is far from the only complicated legacy of Griffith Park. In true L.A. fashion, the land has been consistently tangled in trademark Southland drama, such as freeway developments and public transportation debates, for more than a century. (The park has also been one of the most popular filming locations in the city going back to the silent era.)

Among the first to come up when people talk about the park are the ghost stories — like “the Curse of the Felizes,” said to have caused the untimely downfall of everyone from Griffith to James Dean. Then there are some of the bona fide tragedies: the 1933 Griffith Park Fire, which killed 29 civilian workers, or the installment of an internment camp for Japanese Americans during World War II. Griffith Park also encompasses the land taken by force from the native Tongva Tribe. (Schreiner covers these sagas in the book via historical asides.)

“When people say the land was stolen, I say, ‘It’s not stolen — our responsibility to the land was taken,’” says Julia Bogany, a cultural consultant for the Tongva who wrote a land acknowledgment that opens Schreiner’s book. “Griffith Park is definitely a powerful place. It also has trauma there. But do we stay in those traumas or do we work around them?”

For some, the job of protecting the land is full time. “The park is completely vulnerable,” notes Gerry Hans, president of the nonprofit Friends of Griffith Park. Hans says there are few legal protections against incremental development, such as the gondola currently being considered for shuttling visitors directly to the Hollywood sign. “What happens is you get this slippery slope on every little thing that comes into the park,” he says. “There’s always a new battle.”

Schreiner is not very fond of the gondola idea. “I think it’s one of the dumbest things I’ve ever seen pitched for the park,” he says, laughing, before advocating for more community involvement. “There’s a lot of ways to make noise. A lot happens here, and no one really knows about it.”

But out on the Oak Canyon Loop, he’s not worrying about any of that. Looking out past the zoo, over Burbank and into the mountains beyond, Schreiner is enjoying his day away from the strains of the city, the pandemic and the computer. “We’ve seen one person on this trail so far,” he points out, “and it’s totally quiet — no one’s around.” Just us, the animals and the earth. Oh, and over to the northwest, “North America’s largest IKEA.”

How to jack up your car

Fri Aug 14 , 2020
Summer is road trip season, which often means it’s also car maintenance season. If you’ve just driven halfway across the country and back, you’ll want to change the engine oil and rotate your tires. Don’t fret if you don’t have access to a lift — jacking up a car is […] 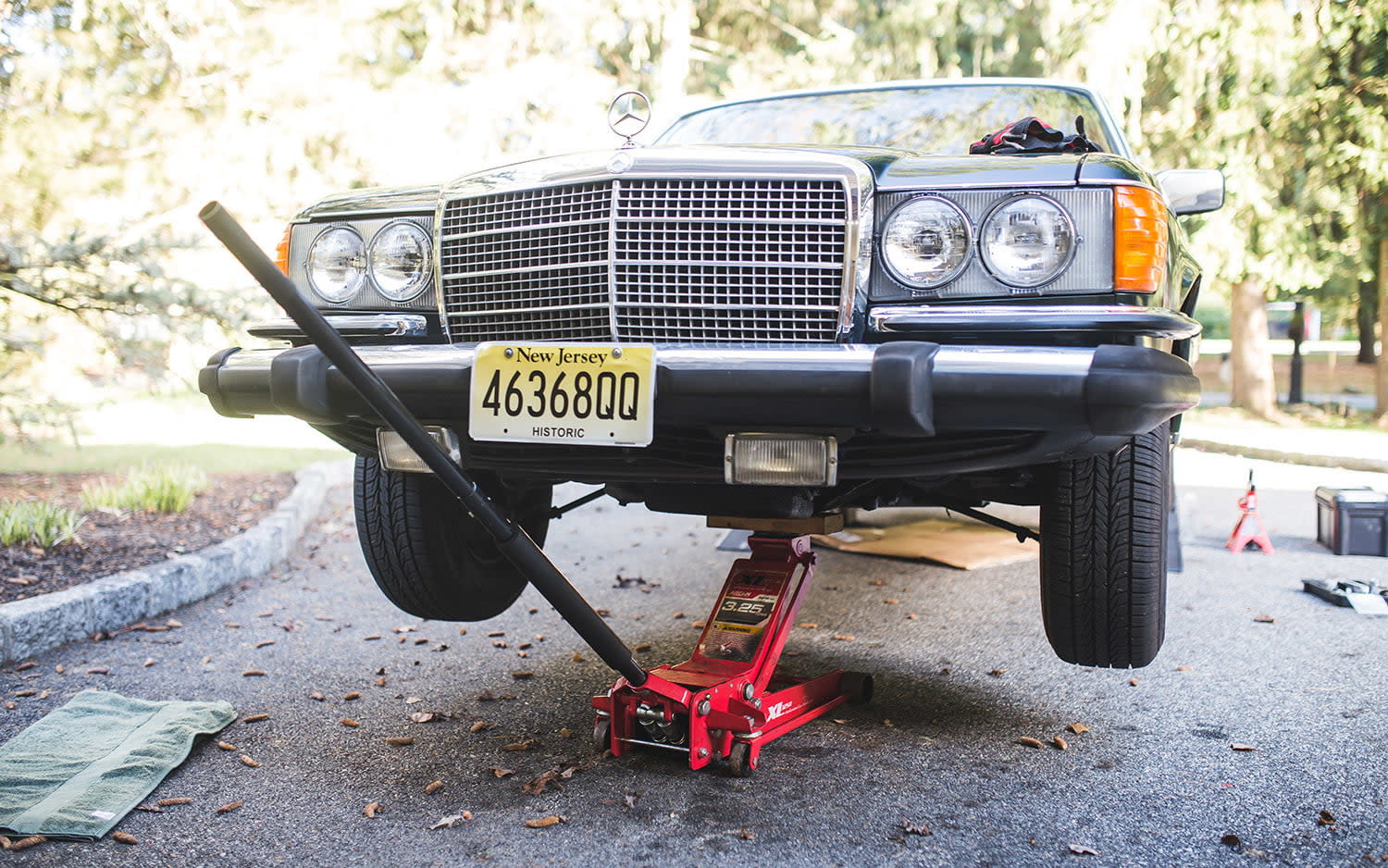