“Given lemons, make lemonade” is the old saying. Some bikers have gone way beyond lemonade by displaying pandemic shutdown creativity in Schaumburg, Palatine and Wheaton. For 20-plus years, the village of Schaumburg and its park district celebrated May as National Bike Month with the “Fahrrad Tour von Schaumburg” — German […]

“Given lemons, make lemonade” is the old saying. Some bikers have gone way beyond lemonade by displaying pandemic shutdown creativity in Schaumburg, Palatine and Wheaton.

For 20-plus years, the village of Schaumburg and its park district celebrated May as National Bike Month with the “Fahrrad Tour von Schaumburg” — German for bike tour — along with a picnic and other events. 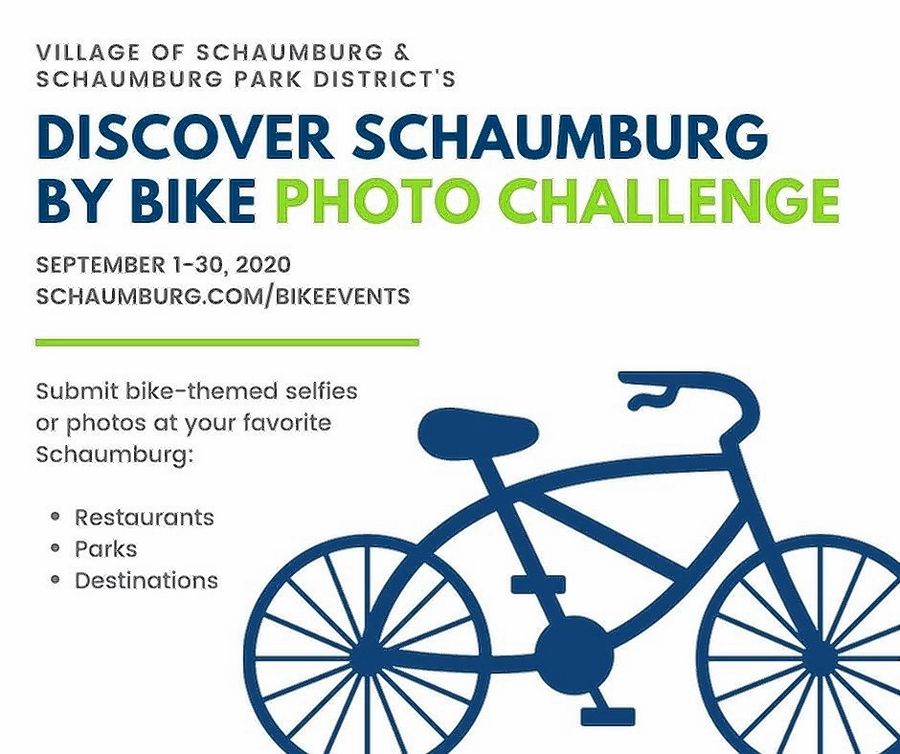 This year the pandemic intervened. So the village claimed September as its bike month with its “Discover Schaumburg by Bike Photo Challenge,” showcasing its 90-plus miles of bike paths plus restaurants, parks and other sites.

Open to everyone, the challenge is to snap as many bike-themed photos of oneself at various Schaumburg locations reached by riding. The winner for each category combined — restaurants, parks and favorite destinations — is the one who visually documents the most visits. The village, park district and Meet Chicago Northwest (Greater Woodfield Convention and Visitors Bureau, Inc.), will provide prizes.

“The true prize is improving one’s health by bicycling, getting out and enjoying summer and early autumn weather,” said Richard Bascomb, Schaumburg Transportation manager. “Explore restaurants representing over 20 countries on six continents, plus regional American fare, and discover all of the hidden gems and beautiful sights of this community.”

Schaumburg’s second annual Business Bike Classic shares September with the photo challenge. Cyclists from Schaumburg businesses form teams of four to compete for most miles biked — stationary bikes included. The top team earns bragging rights and takes possession of the traveling trophy from the Zurich Classic Cycling team, which bested 30 others in 2019.

‘Go by Bike’ Bingo in Palatine: 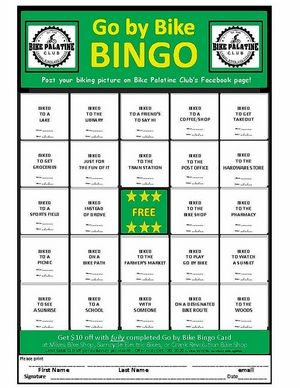 With its rides and events canceled, the Bike Palatine Club launched its “Go by Bike” Bingo program in August. Any rider who completes a simple bingo can redeem the card for $10 off a purchase at three local bike shops: Crank Revolution Bike Shop, Mikes Bike Shop and SamCycle Electric Bikes. The club will reimburse the shops after the program ends Oct. 20.

“‘Go By Bike Bingo’ helps us to encourage local bike riding, boosts our local bike stores, and rewards folks for visiting our club’s website. Readers can print their own card today at www.bikepalatine.com,” Montgomery said.

One can also read the 40-plus biking blogs posted on the website geared especially to newer bike riders.

Individuals like Carrie Provost have channeled their biking creativity, too. A retired music teacher and director of the Youth Symphony of DuPage Concert Orchestra, Provost printed a Google search of Wheaton streets in alphabetical order, determined to ride each one.

“Frankly, I didn’t know what I was getting myself into,” Provost admitted. “I started on April 5 in 39-degree weather. I wore a balaclava, winter gloves and a winter coat.”

“Back in March, I was starting to go a bit stir crazy, being a social, active person. I figured this would be a good way to keep active,” she said.

“I’m guessing there’s another 500 to 800 miles left. I made one rule: Do them exactly in alphabetical order,” Provost said.

So even if she passes Pine Street headed to Maple, she doesn’t count Pine.

A typical “alphabet ride” for Provost is about 21 miles, hitting six or seven streets. She rides to the target, snaps a street sign photo and posts it on social media. Fellow Wheaton Bicycle Advisory Commissioners have also joined her on these outings.

Have a creative biking idea? Share it via email at [email protected]

Sun Oct 18 , 2020
Police in Norway have seized an electric scooter tuned to travel at 36mph – nearly three times the speed limit. The e-scooter was impounded by officers in Oslo during a road safety policing operation in the capital. E-scooters in Norway have a speed limit of 20 kilometers per hour (12.4 […]