Federal troops dressed in combat-style camouflage uniforms were sent to Portland, Oregon, earlier this month to end anti-racism protests happening across the city since the police killing of George Floyd.

The officers drove unmarked vehicles and appeared to “forcefully seize” demonstrators from the streets, according to BBC, detaining people with no justification. House Speaker Nancy Pelosi likened them to “unidentified Stormtroopers” on Twitter, but President Donald Trump has defended the federal action.

We are trying to help Portland, not hurt it. Their leadership has, for months, lost control of the anarchists and agitators. They are missing in action. We must protect Federal property, AND OUR PEOPLE. These were not merely protesters, these are the real deal!

In a tweet, he blamed the city’s officials for failing to control the rallies. “We are trying to help Portland, not hurt it,” Trump wrote. “Their leadership has, for months, lost control of the anarchists and agitators. They are missing in action. We must protect Federal property, AND OUR PEOPLE. These were not merely protesters, these are the real deal!”

The dispatch of heavily armed forces has escalated confrontations with protesters demanding justice and equality. Here’s everything you need to know about the ongoing situation in Portland.

Protestors are protecting themselves with pool noodles.

The presence of federal agents in Portland has exacerbated the city’s already tense circumstances. According to the BBC, the personnel are from the Customs and Border Protection (CBP) agency, the U.S. Marshals Service, and the Federal Protection Service.

Videos circulating online appear to show officers grabbing people off streets with no reason for arrest and shoving them into unmarked vans. Protestors have been protecting themselves with shields “made of pool noodles, umbrellas and sleds” and body armor “pieced together with bicycle helmets and football pads,” according to New York Times reporter Mike Baker, who writes that their homemade “weapons” included water bottles and cigarette lighters.

“With the movement largely without leaders or a consistent strategy, city officials have been unable to find a way to bring the demonstrations to an end,” Baker writes for the Times. “Now those protesters are giving grief to federal agents who were assigned to maintain calm in the city but have instead watched the number of protesters outside the federal courthouse swell into the thousands.”

Navy veteran Christopher David was beat and sprayed with chemicals by federal officers.

The video shows an agent raising a baton and beating David, who stands completely still, arms by his sides, as another officer sprays his face with chemical irritant. David flips them off and walks away. He later learned that his hand was broken in two places.

“You hear people like [President] Trump say it’s just a bunch of wacko fringe people in liberal cities who are out there, but no way,” David told The Washington Post. “We’re all just normal people who think what’s happening is wrong.”

Portland women created a “Wall of Moms” to protect protesters.

A group of women calling themselves the “Wall of Moms” have been linking arms at protests to form protective barriers between protesters and law enforcement dispatched by Trump.

“Wall of Moms” member Jane Ullman told The Guardian that she was one of thousands of moms to participate. “As an upper-middle-class white woman in the whitest city in America, I couldn’t stand by any longer,” she told the outlet. “I’ve been doing a lot of self-educating since George Floyd. Reading and learning. The feds’ part in it pushed me over the top. I wanted to take action. But it was the ‘Wall of Moms’ that brought me out.”

According to the group’s website, “Wall of Moms” is a Portland-based “network of womxn and non-binary mother-identifying folx dedicated to supporting the current civil rights movement to end police brutality by defending and supporting BLM protesters on the front line and online.”

“We moms are often underestimated,” the group says on their site, “but we’re stronger than we’re given credit for.”

A naked protestor known only as “Athena” silently confronted police.

The woman was wearing a face mask and stocking cap, and “walked out to the intersection in front of where police were standing,” according to The Oregonian‘s Ryan Nguyen. “She paced the area near the crosswalk. She laid down, kicking up her feet. She did ballet poses.”

Photos and video of her quickly went viral on social media last week.

A cropped version of this photo I shot on Friday is getting a lot of attention; I don’t mind the crop but I do prefer the full version, so I’m putting it here pic.twitter.com/iraXCqYYP2

Dave Killen, a photographer for The Oregonian, said he saw “Naked Athena,” as she’s being called, in the street around 1:45 a.m. after a “huge police response” to a protest.

“While a powerful moment and a very brave thing of the person to do, it’s not really representative of the night overall or the protests as a whole,” Killen wrote on Twitter. “I would encourage anyone seeing this photo now to seek out the totality of the coverage of what has been happening in Portland since late May, not just from my paper but other local outlets and the myriad of independent journalists who are out there every single night.”

“We have an already heightened situation. It’s already tense,” Portland Mayor Ted Wheeler told NPR. “But after nearly five weeks of demonstrations, we are starting to see that small handful of people who were engaged in criminal activity—it was dissipating. It was calming down. We believed a week ago it would be over by this weekend. But what happened instead is the feds stepped in with a very heavy-handed approach, and it blew the lid off the whole thing.”

“You’ll see something rolled out this week as we start to go in and make sure that the communities, whether it’s Chicago or Portland, or Milwaukee, or someplace across the heartland of the country, we need to make sure our communities are safe,” White House Chief of Staff Mark Meadows said on Fox News.

Jann Carson, interim executive director of the American Civil Liberties Union of Oregon, said in a statement that the federal action in Portland right now should “concern everyone in the United States… Usually when we see people in unmarked cars forcibly grab someone off the street we call it kidnapping. The actions of the militarized federal officers are flat-out unconstitutional and will not go unanswered.”

The state of Oregon has filed a lawsuit.

The lawsuit filed by Oregon Attorney General Ellen Rosenblum alleges that the United States Department of Homeland Security, the United States Marshals Service, the United States Customs and Border Protection, the Federal Protection Service, and their agents engaged in “unlawful law enforcement in violation of the civil rights of Oregonians by seizing and detaining them without probable cause.”

“I share the concerns of our state and local leaders – and our Oregon U.S. Senators and certain Congressional representatives – that the current escalation of fear and violence in downtown Portland is being driven by federal law enforcement tactics that are entirely unnecessary and out of character with the Oregon way. These tactics must stop. They not only make it impossible for people to assert their First Amendment rights to protest peacefully. They also create a more volatile situation on our streets. We are today asking the federal court to stop the federal police from secretly stopping and forcibly grabbing Oregonians off our streets, and we are announcing a state criminal investigation, with the Multnomah County District Attorney, into the incident resulting in serious injuries to a peaceful protester — apparently committed by a federal police officer in downtown Portland last week,” Rosenblum said in a statement. “The federal administration has chosen Portland to use their scare tactics to stop our residents from protesting police brutality and from supporting the Black Lives Matter movement. Every American should be repulsed when they see this happening. If this can happen here in Portland, it can happen anywhere.”

Wed Jul 22 , 2020
Tesla (TSLA) posted a profit in the second quarter, defying Wall Street estimates after the electric car-maker delivered more vehicles than expected in the quarter despite virus-related disruptions. Here were the main results from Tesla’s Q2 report, compared to consensus estimates compiled by Bloomberg: Revenue: $6.04 billion vs. $5.4 billion […] 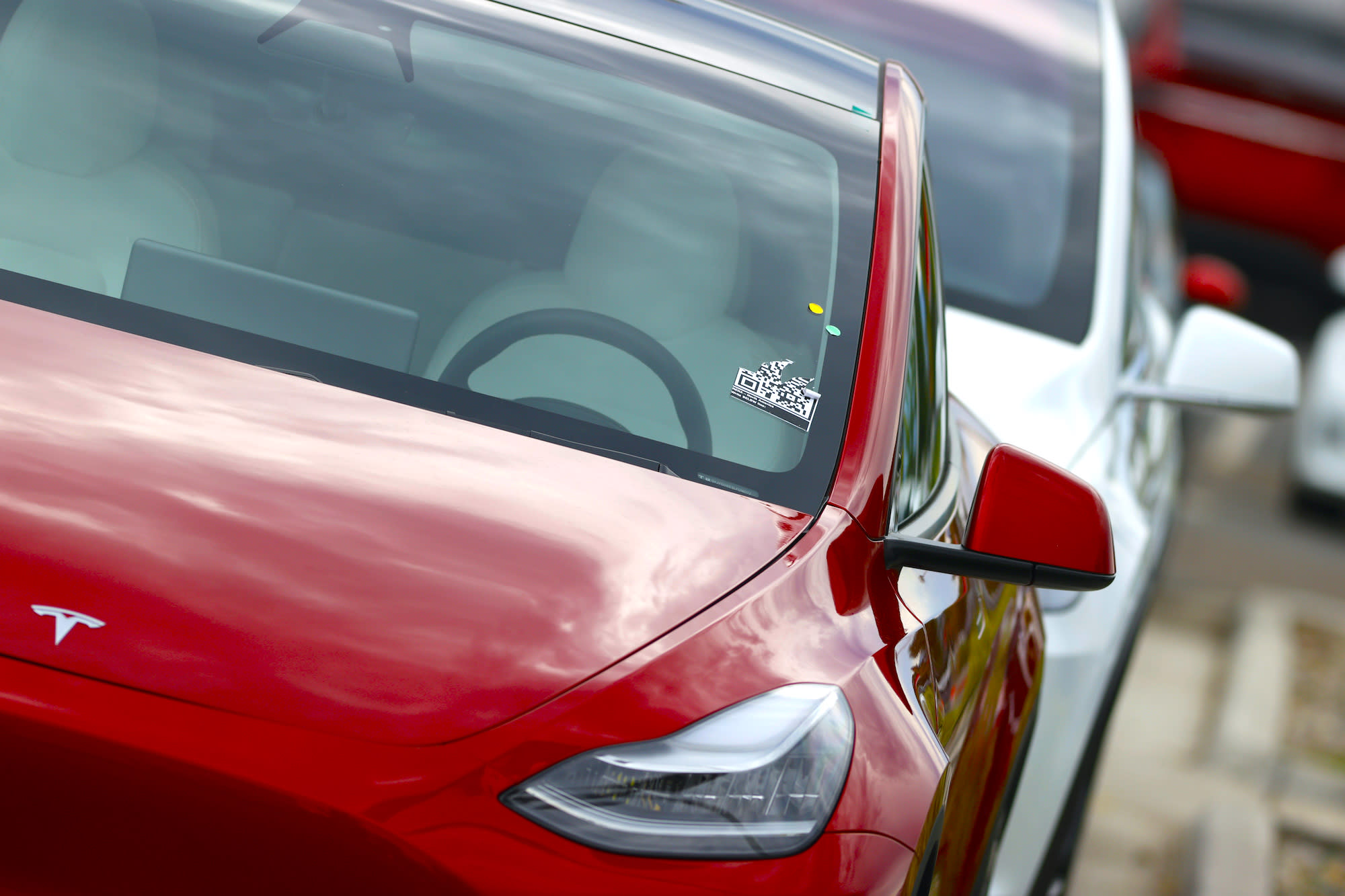