TheWrap on Thursday announced the 12 finalists for the ninth annual ShortList Film Festival, including stories from around the world about abortion, gender-identity, gentrification, bullying, opioids and a garbage man who lives alone on an asteroid. Online viewing and voting launches today on ShortListFilmFestival.com and runs through August 19. The […]

TheWrap on Thursday announced the 12 finalists for the ninth annual ShortList Film Festival, including stories from around the world about abortion, gender-identity, gentrification, bullying, opioids and a garbage man who lives alone on an asteroid.

Online viewing and voting launches today on ShortListFilmFestival.com and runs through August 19. The jury will award the Industry Award while TheWrap’s online voters will determine the Audience Award and Student Award. The winners will be announced at a virtual awards ceremony on August 20.

In addition to the lineup of festival winners, the ShortList Film Festival also features up-and-coming filmmakers from top film schools across the country. The 2020 student films come from five schools: University of Southern California (USC), Savannah College of Art and Design (SCAD), University of California Los Angeles (UCLA), University of North Carolina School of the Arts (UNSCA) and Chapman University.

“Abortion Helpline, This Is Lisa“
Directed by: Barbara Attie, Janet Goldwater and Mike Attie
Synopsis: At an abortion helpline in Philadelphia, counselors field urgent calls from people seeking to end a pregnancy, but can’t afford to. “Abortion Helpline, This Is Lisa” reveals the brutal impact of the Hyde Amendment, designed to prevent those struggling financially from access to abortion.

“Broken Orchestra“
Directed by: Charlie Tyrell
Synopsis: “Broken Orchestra” documents the problem of broken instruments in Philadelphia schools in a way that reflects the severity of the problem. Told through a series of tracking shots of television screens, orchestra members and teachers come together to shed light on this tough issue.

“Cosmic Fling“
Directed by: Jonathan Langager
Synopsis: “Cosmic Fling” is the tale of Stan, an intergalactic garbage man who lives alone on an asteroid. To feed himself, he harpoons space debris and converts it into nourishment. To feed his soul, he dreams only of love. He falls instantly in love…but must wait for her comet to return.

“Girl in the Hallway“
Directed by: Valerie Barnhart
Synopsis: “Why does ‘Little Red Riding Hood’ give Jamie nightmares? It’s been 15 years, and the girl in the hallway haunts him still. This is a testament to locked doors. A lullaby sung by wolves with duct tape and polaroids. Not all girls make it out of the forest. Some stories children shouldn’t hear.

“No More Wings“
Directed by: Abraham Adeyemi
Synopsis: A nostalgic love letter to writer and director Abraham Adeyemi’s adolescence. It explores the significance of community, gentrification’s impact on it and whether decisions of the past have irreversible lifelong consequences.

“-Ship: A Visual Poem“
Directed by: Terrance Daye
Synopsis: Across one day of mourning, four family members try to surmount the unspoken, the unspeakable, and the still-present past that divides them.

“Sticker“
Directed by: Georgi M. Unkovski
Synopsis: After an unsuccessful attempt to renew his car registration, Dejan falls in a bureaucratic trap that tests his determination to be a responsible father.

“The Clinic“
Directed by: Elivia Shaw
Synopsis: Amidst a devastating opioid epidemic, a needle exchange and free clinic operates in the shadows of Fresno, California.

“The Devil’s Harmony“
Directed by: Dylan Holmes Williams
Synopsis: A bullied teenage girl leads an a cappella club on a trail of destruction against her high school enemies.

“White Eye“
Directed by: Tomer Shushan
Synopsis: A man finds his stolen bicycle and it now belongs to a stranger. In his attempts to retrieve the bicycle, he struggles to remain human.

“Drifting“
Directed by: Hanxiong Bo
Synopsis: Yan is an illegal second child born during the time of China’s One-Child policy. To avoid government punishment, Yan’s parents hide their oldest daughter in the countryside and raise Yan as a girl. Now a young adult, Yan struggles with his gender identity and being treated as an outcast in a conservative society. His sole escape is drifting his father’s old taxi through abandoned parking lots.

“Ghazaal“
Directed by: Ragini Bhasin
Synopsis: A 13-year-old Afghan refugee hustles around in a refugee camp, trying to survive the harsh circumstances.

“The Senator“
Directed by: Shayain Lakhani
Synopsis: “The Senator” takes place in the late 1950’s, less than 100 years ago, and displays a day in the life of Essie and Carrie Butler. Their story guides attention towards issues that have transcended time and are still an issue in modern day society, such as racism and the role of women.

“Welcome Back“
Directed by: Tiffany Kontoyiannis
Synopsis: “Welcome Back” centers around Rosa and her daughter, Sophie, who have been deported back to the extremely dangerous and communist Venezuela.

The annual event features 12 of the top award-winning short films that have premiered at major festivals over the past year, making it the most highly competitive film festival of its kind. Films will be streaming and open for voting on ShortListFilmFestival.com and TheWrap.com from August 6-19.

The ShortList Film Festival 2020 is sponsored by Heineken and Topic.

Thu Aug 6 , 2020
NEW YORK CITY — Mayor Bill de Blasio offered some free advice to New Yorkers concerned getting around the city after the coronavirus pandemic: “Do not buy a car.” “Cars are the past,” he said Thursday. “The future is going to be mass transit, biking, walking and there’s so many […] 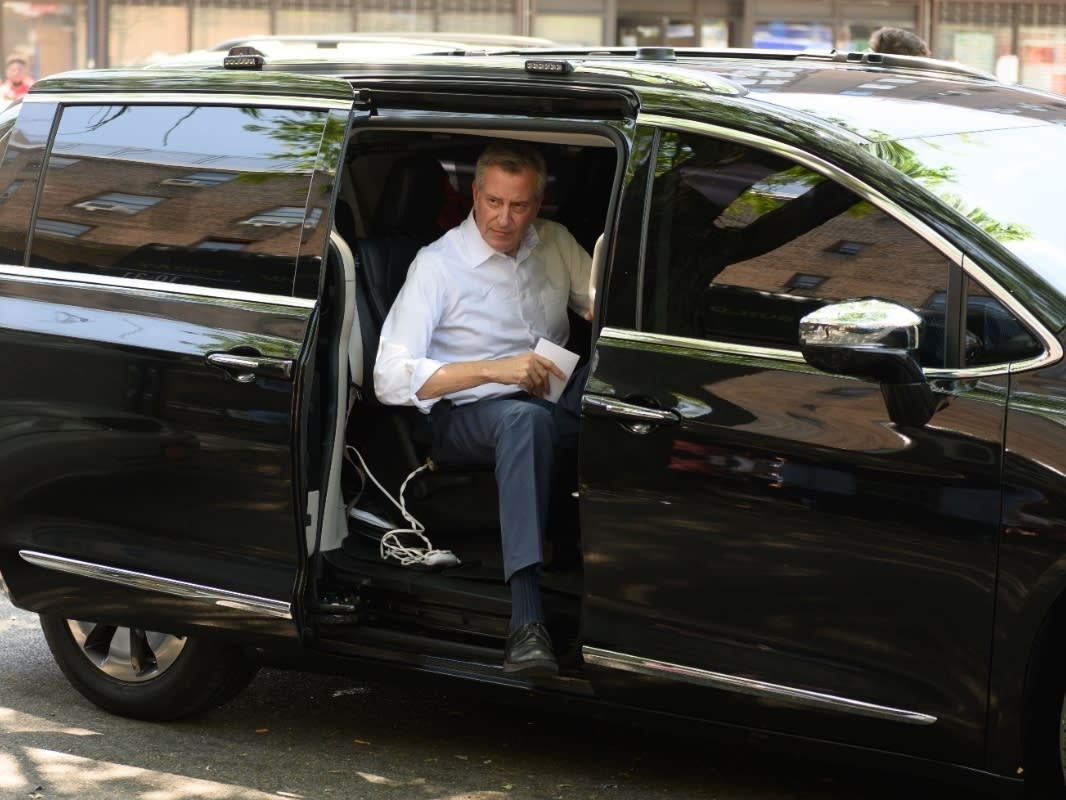